The Jacksons have been entertaining audiences for over fifty years! Jermaine's brothers Jackie, Tito and Marlon are still performing, taking the audiences on an interactive, unforgettable journey through their lives and musical career, offering a soulful pop-funk and impeccable live performance that has made them one of the most beloved musical acts of all time...! Jermaine Jackson enjoys performing with orchestras. 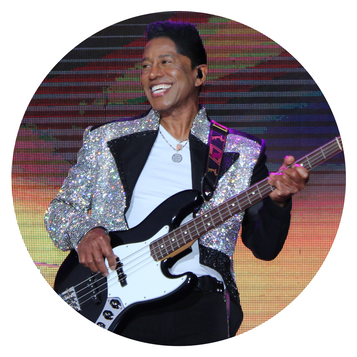 Jermaine Jackson and The Jacksons

Jermaine Jackson was invited to perform a set of songs with a 47-piece orchestra for the Motown 60th Anniversary Orchestral Concert on November 3rd, 2019 at the World Heritage Yakushi-ji Temple in Nara, Japan. Jermaine also made his debut at the Blue Note Tokyo with four shows with a 4-piece band on 7, 8, 9 and 10 November 2019.

In 2017, Jermaine Jackson performed "Do What You Do", "Ben", "The Christmas Song" and "Don't Stop 'Til You Get Enough" with the Metropole Orchestra for the televised MAX Proms Christmas Show. For "The Christmas Song, Jermaine was joined by his two youngest sons, Jaafar and Jermajesty, who both made their stage debut alongside their father.

Jermaine also performed "Can You Feel It", "When The Rain Begins To Fall", "Blame It On The Boogie", "J5 Medley", "I'll Be There" and "Shake Your Body" for the televised MAX Proms 2017 New Year's Eve Show.

In 2019 Jackie, Tito, Jermaine and Marlon embarked on a World Tour as The Jacksons, taking their show to the contents of Oceania, South America, North America and Europe. Jermaine performed on 21 shows along with his brothers that year.

In 2018, In 2018, Jackie, Tito, Jermaine and Marlon continued to perform with 16 shows festivals and huge crowds, mainly in Europe, as well as a few dates in the United States. Jermaine performed on 14 shows with hi sbrothers that year.

In 2017, The Jacksons (Jackie, Tito, Jermaine and Marlon) performed 13 shows in the United Kingdom as part of A Celebration of 50 Years, as well as one show in Canada and in The Netherlands. The Jacksons perform at the major British festivals in front of an audience of hundreds of thousands, including Glastonbury Festival that is aired live by the BBC.

Although the setlist has not changed a lot for the show, a solo segment by Tito Jackson is added to the show as well as "State of Shock" as the encore for a few events.

In February of 2016, The Jacksons perform 10 shows at Art on Ice sharing the stage with the world’s best figure skaters (Olympic winners, World and European Champions) and dancers in the cities of Zürich, Lausanne and Davos in Switzerland. And that year, the brothers performed another 14 shows on scattered dates in casinos in the United States, special events such as Art on Ice in Switzerland and festivals in Canada, USA, Japan and South Africa. Due to scheduling conflicts, Jermaine was not part of five shows that year.

In 2015,  The Jacksons performed 11 shows live on stage in the United States at casinos, two festivals in the United Kingdom and at Malaysia Grand Prix. The concert at BBC Proms in the Park in London is performed with the 80-piece London Symphony Orchestra for an audience of over 40,000 people which is broadcast live online and watched by over a 100 million viewers!

In 2013, The Jacksons tour the world as part of the Unity Tour, performing more than 25 shows in the United States, Europe, Africa and Australia. For most of these shows, Jermaine performs a set of his solo music such as "Dynamite", "When The Rain Begins To Fall", "Let's Get Serious" and "Do What You Do".

In 2012, after nearly three decades, brothers Jackie, Tito, Jermaine and Marlon reunited to embark on The Jacksons Unity Tour! In November of that year, The Jacksons also play 12 dates at Night of The Proms in Belgium and The Netherlands performing a 30-minute set of hits with the Il Novecento orchestra at the classic meets pop event.

In between the You Are Not Alone Musical Tour in France and the European leg of the Unity Tour with his brothers, Jermaine spent ten days in Maastricht in The Netherlands in February of 2013 to collaborate with violinist and composer André Rieu and the Johan Strauss Orchestra.

During his stay in Maastricht, Jermaine agrees to perform with André during his annual Summer concerts at Vrijthof Square where he performed “Smile” and “When The Rain Begins To Fall” during three nights on 12, 13 and 14 July with André Rieu and the Johan Strauss Orchestra in Maastricht, The Netherlands during André Rieu & Friends.

In 2013, Jermaine launched the You Are Not Alone The Musical in France with four shows at Barrière casinos (in Bordeaux, Toulouse, Deauville and Enghien-les-Bains) and two at Théâtre des Variété in Paris. In the show Jermaine tells the story of his family based on his memoirs with pictures and music, including performing “When The Rain Begins to Fall”, “Do What You Do”, the tribute song “Oh Mother” and the unreleased ballad “The First Time You Love”. The musical closed with a performance of a 25-minute medley of Jackson classics. Unfortunately, producer of the show David Serero mistreated Jermaine during the tour and failed to meet the production standards as requested by Jermaine for the musical show. The musical show concept is being developed and planned to return to stages the way Jermaine intended and envisions it with high quality productions including a full orchestra.

Both of these live registration releases are not authorized or acknowledged by Jermaine Jackson.

In 2010, Jermaine Jackson performed two solo concerts, one in The Gambia, Africa (29 May, at 5th Kanilai International Festival) and another in Las Vegas, United States (2 October) Celebrating 40 Years of Jackson Family Music with a band that included three keyboards, three guitars (one of the guitar players was his son Jeremy), four background singers, eight dancers, a drummer, a percussionist and a programmer.

The Michael Jackson: 30th Anniversary Special was a 2001 (7 and 10 September, 2001) New York City revue show by Michael Jackson when he reunited with his brothers Jermaine, Jackie, Randy, Tito and Marlon to perform a greatest hits medley. Tickets sold out in five hours. Unfortunately, this would be the last time the world was able to see the magic and the phenomenon of six brothers from Gary, Indiana all together live on stage.

The second part of the show featured the reunion of Michael and his brothers Jermaine, Jackie, Randy, Marlon, and Tito for a "greatest hits" medley, including their headlining songs:

Can You Feel It
ABC
The Love You Save
I Want You Back
I'll Be There
Shake Your Body (Down to the Ground)
Dancing Machine (with special guests, *NSYNC)

In late November 2001, the CBS television network aired the concerts as a two-hour special in honor of Michael Jackson's thirtieth year as a solo entertainer (his first solo single, "Got to Be There", was recorded in 1971). The program attracted an audience of over 26 million viewers in the U.S. and over 450 million viewers worldwide, making it the most watched TV special of the decade.

During October and November of 1987, Jermaine Jackson came to Australia to give a series of concerts.

Jermaine returned to Australia the next year during the months of June and July of 1988, and toured all over the country with his band for a series of 16 concerts. The tour was promoted by John Preston Entertainment group. 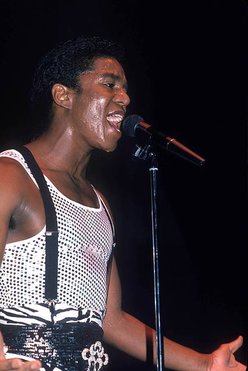 Jermaine Jackson's first solo tour Precious Moments ran between March and mid September 1986 with 23 dates throughout the United States and Canada, including the Universal Amphitheatre in Los Angeles (where brother Michael attended the concert), the Holiday star theatre in Merrillville (Indiana), Miller sound express, New Orleans and Boston Common, in Boston (on 10 July, Whitney Houston attended the concert). The tour was produced by Jermaine, and the technical production work provided by Allied artists concert production.

Jermaine Jackson also performed one of the shows for the 7UP Music Machine Concert at The Apollo theatre in New York (seventeen years after his first performance there with the Jackson 5) on August 31st, 1986. That concert tracklist is:

Following the success of the reunion, all six brothers during the Motown 25 TV special in March 1983, they record a sixth album for Epic, released as Victory in 1984. Their biggest-selling album to date included the top ten single, “State of Shock”.

In July of 1984, the Jacksons launched their Victory Tour. The group performed 55 concerts to an audience of 2 million and the tour sold what was then a record number of ticket sales. During the show, Jermaine performed a solo set of his hits "Let's Get Serious", "You Like Me, Don't You", and "Tell Me I'm Not Dreamin' (Too Good To Be True)".

Between 1973 and 1976, The Jackson 5 play over 160 concerts all over the world including Japan, Hawai, United Kingdom, South America, Hong Kong, New Zealand, Australia, The Philippines and the West Indies over a 4-year period. The original Jackson 5 last group tour includes 6 concerts in Manila, Phillipines, less than a month after Jermaine decides to stay at Motown when his brothers move on to another label as The Jacksons.

The brothers 12-day tour in November of 1972 in Europe had the Jackson 5 break attendance records previously held by The Beatles. During the tour, the band performed for Queen Elizabeth, The Queen Mother.

In 1972, Jackie, Tito, Jermaine, Marlon and Michael visit venues in circa 50 cities during their third tour of the United States.

In 1971, The five brothers' second US tour featured about 43 performances in US cities such as Philadelphia, New York and Milwaukee. The Commodores, led by Lionel Richie, opened for the five quintet.

The Jackson 5 embarked on their first ever tour on May 2, 1970. The brothers performed 14 shows in US states cities such as Daly City, Boston, Cincinnati and New York City, and broke venue attendance records along the way.

Jackie, Tito, Jermaine, Marlon and Michael professionally debuted on stage in 1967. They play shows in malls and venues mainly in the state of Illinois before 1968 and later they play clubs and theaters in Chicago and New York for two years, before the band signs with Motown in March 1969.  The Jackson 5 win the Superdog Finals in Amateur Night at the Apollo Theater in New York on 14 February, 1969.